So, for sustained relief, you’d have to do it regularly.

Pain Relief With or Without Orgasm

While some forms of pain relief may be dependent on orgasm, sexual pleasure alone can be helpful. Certain feel-good neurotransmitters, like prolactin, are orgasm-specific, but others, like dopamine, are present without orgasm.

Eddie, a 23-year-old Amazon worker in Michigan who identifies as a transmasculine nonbinary person, uses his clitoris to relieve symptoms of Ehlers-Danlos Ssyndrome (EDS), a disorder that affects connective tissue, causing sore and clenched muscles. Initially, he tried a number of pain medications, which didn’t do much for him when he has to work. But after he masturbates, his pain decreases considerable, often enough for him to continue his shift.

Pain relief also may be psychological rather than directly physical. “If you can stop focusing on the anxiety about the pain itself, you can better cope,” explains mental health counselor and sex therapist Michael Stokes, EdD, LMHC. “You will learn to focus your mind on the things you want to focus on.”

Can Vibrators Desensitize Your Clitoris? BLAC Asks The Experts 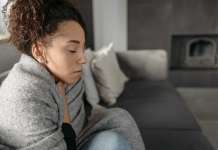 Seven Home Remedies For The Common Cold: What To Do When You’re Feeling Sick

Beat the Spread: 10 Tips to Stay Safe During the Holidays...

‘Julie,’ The Newest FDA-Approved Morning-After Pill, Was Created By A Black...